The Retired Teachers Association has over 6,000 members and meets monthly at Federation House, usually with a guest speaker.
The Committee meets at 11.00 a.m. A light Lunch is provided at 12.15 p.m. (all welcome)

Visiting Speaker at 1.00 p.m. followed by the General Meeting at 2.00 p.m. We generally conclude by 3.30pm.
SPECIAL NOTE to new (and not so new) retired teachers.
You are very welcome to come to our meetings, social events and luncheons. Bring a partner or friend with you if you wish.
You do not need to be a member.
If are are a current or very recent member of the Teachers Federation you are encouraged to transfer your membership to the Retired Teachers Association (RTA) and retain some benefits.
Due to complex industrial laws, non members of the Teachers Federation cannot automatically join the RTA. An application to join (either online or by paper form) will be forwarded to the General Secretary who has discretionary powers to grant membership under certain conditions.
Social Events. Each month there is also a social event and a luncheon. To see the dates for the year go to this link CLICK HERE
The luncheon is noon on the WEDNESDAY after the meeting at the Bowlers Club, 99 on York. Not far from the York St exit from The Queen Victoria Building.
PHOTOGRAPHS
For a link to some photographs taken at some of our meetings and social events CLICK HERE

The February meeting is on Friday 21st February at Federation House. (NOTE, 3rd Friday, not usual 2nd Friday)
The committee will meet at 11am.
There will be a free simple lunch at 12.15pm for members, guests and visitors.
The Guest Speaker commences at 1.00pm
The general meeting will follow at 2.00pm and ends generally on or before 3.30pm

The Guest Speaker this month is RICCARDO BOSI
He is an author and award winning speaker, a strategic and operational leader and innovator with a record of achievements in private and public sectors, domestically and internationally with extensive experience creating new and developing existing organisations.
Riccardo will speak on "Afghan Adventures".
This describes the extraordinary personal and professional experiences during the five years Riccardo and his family lived in the United Arab Emirates (UAE). Riccardo was contracted as an advisor to the UAE military's Special Operations Command and part of his responsibilities was to train and deploy with them to Afghanistan.

Posted by Retired Teachers Association NSW at 3:29 PM No comments:

The usual luncheon is at NOON on the Wednesday after the monthly meeting,

If your dining tastes run more to grazing, then you can’t go past Club York’s All You Can Eat Buffet. You’ll be spoilt for choice with a fabulous selection of more than twenty hot and cold dishes, including seafood and decadent desserts.

Adjacent to Zabou Bar & Grill on Level One, the All you Can Eat Buffet is fully serviced with a large selection of beer, wine and soft drinks.  Ideal for groups and families, just gaze, graze and feast.

Posted by Retired Teachers Association NSW at 9:43 AM 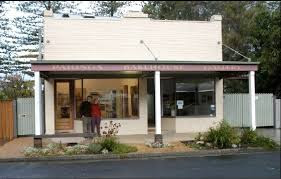 On Monday 30 March 2020 we will cruise from Palm Beach to Patonga VIA THE MANLY FERRY
7.45am meet at Circular Quay Transport to Palm Beach Wharf.
8.10am catch the Manly Ferry, arriving Manly at 8.40am
At 9.05am catch the 199 Bus from Stand G, Belgrave St, Manly to Palm Beach Wharf, arriving there at 10.25am.
We will then have our second ferry ride, going from Palm Beach Public Wharf on the Palm Beach and Hawkesbury River Scenic Cruise , however we will disembark at Patonga at 11.00am.
Here at Patonga you can buy lunch at the newly renovated Boat House Hotel which has a range of sit down meals and take away.
Visit the Patonga Bakehouse Gallery, 19 Bay St, Patonga. Jocelyn Maughan, winner of the 2019 Gosford Art Proze, runs the gallery. She is well known and respected; she entered a portrait of Allan West in the Archibald Prize.
The cost of the boat trip from Palm Beach to Patonga is $15 return for pension card holders.
The cruise boat then gets back to Patonga at 3.00pm for the return to Palm Beach at 3.30pm.
We then catch the Bus 199 to Manly from across the road from the Wharf.
Then the fourth ferry ride of the day back to Circular Quay
Contact Max Prince  on 0431 473 983 for more details.

Posted by Retired Teachers Association NSW at 1:30 PM No comments:

On Friday 14 February 2020 we visited the Great Synagogue of Sydney with
lunch at the Bodhi Restaurant in College St, Sydney. Thanks Max Prince.

Posted by Retired Teachers Association NSW at 3:29 PM No comments:

Enid Hokin has sadly passed away 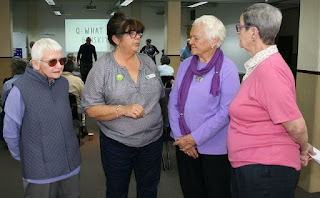 We would like to let you know that Enid Hokin (far left) died in late December.

Enid was very well known and respected. She will certainly be missed at our meetings.
Enid took social issues very seriously. She attended most RTA meetings, and always had one or more matters to be raised.

The Retired Teachers Association made a donation of $100 to ABC Friends NSW in memory of Enid .

Below is a number of the proposals for discussion and resolution raised by Enid over the years. Read these in her memory and hold your own minute of silence as a mark of respect for a tireless champion of social justice.

Enid Hokin presented a motion condemning the NSW Government for the massive cuts it has made to Technical and Further Education. Since 2012, such cuts have amounted to $130 million and Federation has estimated that some 4000 jobs have been made redundant. The motion was carried unanimously by members at the August meeting.

The Retired Teachers Association strongly condemns Prime Minister Scott Morrison for his November announcement of federal legislation to ban protests. This is a direct attack on free speech and seriously undermines our democratic processes. Enid Hokin’s motion expressing this alarm was carried unanimously by our association.

Enid Hokin presented a motion condemning Gladys Berejiklian and Luke Foley for supporting the promotion of a horse race by using the sails of the Sydney Opera House. Both the Premier and Leader of the Opposition should undertake to never again endorse the Sydney landmark being so abused. The motion also included an expression of disgust that our new Prime Minister referenced the Opera House as “Sydney’s biggest billboard”. Enid’s motion was carried unanimously.

Enid Hokin addressed our November meeting on the importance of strong publicly funded TAFE colleges and the declining resources that they are receiving from the State Government. The corresponding rise of private institutions that are beginning to take TAFE’s place has led to a dearth of adequately trained tradespeople in NSW. Enid’s motion calling on the Berejiklian Government to restore adequate funding to the TAFE sector was unanimously supported by members.

Enid Hokin moved that the NSW RTA call on the Federal Government to immediately redirect the $240 million currently allocated to the school chaplaincy program to the employment of school counsellors. The funding arrangements for the chaplaincy program were struck down by the High Court. The Federal Government is forcing religious advisors on students regardless of their parents’ wishes. There is no justification for employing untrained people to counsel students and to enforce religious influence on vulnerable students who are entitled to the very best support that can be provided. Questions of religion are properly the responsibility of families (three members against).

Enid Hokin moved that the NSW RTA call upon the federal government to restore the funding it has withdrawn from the Macular Disease Foundation to permit the foundation to continue its valuable work and education program.

Enid Hokin moved that the RTA call for the resignation of the NSW Minister for Health, Jillian Skinner. Traditionally, ministers are responsible for the performance of their departments, and there has been a spate of disgraceful events in NSW Health, for example, the death of a newborn baby and brain damage to another one at Bankstown Hospital as a result of being administered dangerous gases, and patients being incorrectly advised and treated by oncologists at St Vincent’s and St George Hospitals.

Enid Hokin moved that the NSW RTA demand that the Federal Government review funding cuts to the ABC and SBS. For Communications Minister Malcolm Turnbull to promote himself as a friend of the ABC is monumental hypocrisy when he calls on the ABC and SBS to maintain programs and staff while gouging millions from their funding. Already, there have been savage staff reductions, and many hundreds more will go. Only the ABC and SBS provide unbiased news and current affairs programs, Australian culture and entertainment, quality overseas programs and high standard professionalism — all of this and a service to people all over this huge country, large areas of which are completely ignored by commercial networks whose standards, in many cases, are hardly commendable. The ABC does belong to the taxpayers and must be funded to serve them adequately.

Posted by Retired Teachers Association NSW at 4:41 PM No comments: 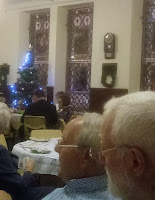 News has come that a wonderful member and much respected past secretary Allan West died of cancer on Thursday 14 November 2019.

Allan, bottom right in this photograph, moved in the past year from his Castle Hill address.

We will make a $200 donation to Amnesty International Australia in his name and a card.
Posted by Retired Teachers Association NSW at 9:39 AM 1 comment:

AT THE ANNUAL GENERAL MEETING ON FRIDAY, 8th NOVEMBER, 2019,


Federation has always been dedicated to the principles of representative democracy. Our highest decision-making body is Annual Conference, which meets to debate and vote on motions that determine the priorities and future actions of the union. Federation’s Annual Conference in 1919 had more than 100 motions to debate.

Posted by Retired Teachers Association NSW at 12:31 PM No comments: